Heard of liquid nitrogen dosing? If not, you will be.

Liquid nitrogen dosing has been around for quite some time, but many industries are just now realizing the benefits of using this process as a cost effective way to preserve and increase shelf life of drinks such as soda, beer and wine, canned vegetables and soups, and even water bottles.

There are three common applications for nitrogen dosing. Pre-purge which essentially cleans containers prior to be filled with the manufacturers contents. Post-fill dose which lowers oxygen levels and adds preservation, resulting in improved shelf life and cost savings. Nitrogen is also used in Nitro Beers as a cost effective alternative to widgets.

A dosing system includes a permacyl (or Microbulk tank) that houses nitrogen. The nitrogen then flows to the phase separator which insures the nitrogen is in liquid form as it gets to the doser. The doser distributes the liquid nitrogen into the container of product prior to sealing, and is compatible with most production lines. The doser is programmed to be consistent accurate, with the ability to dose up to 2,000 containers in one minute depending on the doser model.

The process of dosing also adds pressure to certain containers including cans and plastic bottles. This increases the strength of these containers for stacking and shipping purposes, and also results in a reduction of the weight which can lead to savings for certain product lines. 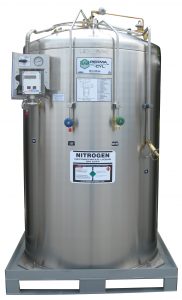 Where does Keen come in?
Everywhere! From the nitrogen and cylinder supply to working with our trusted vendors to help set up a nitrogen dosing system that works best for your application, Keen is your one stop to make your process more efficient and cost effective. Contact your account rep or local store to get started!